DatePickerDialog – how to open Material-UI's DatePicker with a button (or any other element).

Here's what happens when you try to open the DatePickerDialog with a keyboard event – in this case, selecting the button and pressing 'Enter':

The same thing happens if the dialog opens under or near your cursor and you immediately move your mouse as it's opening. 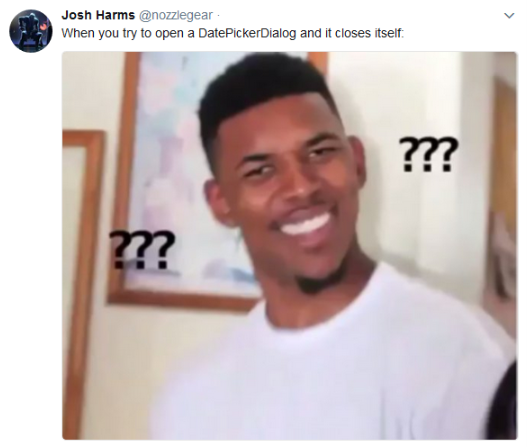 Luckily solving #1 was pretty straightforward after a quick look through source code, and #2 was solved after searching StackOverflow. #3 and #4 were different stories though. After hours of googling, looking through source code, and searching GitHub issues, I've finally found the solution: use a reference to the dialog and overwrite its handleRequestClose and handleWindowKeyUp functions.

The handleWindowKeyUp function is used by the DatePickerDialog to determine if the user has pressed "Enter" on a calendar day and will then close it. There's a bug in there somewhere (again, I haven't figured out where) that will immediately close the dialog after it's been opened with a key event.

Overwriting the handleRequestClose function won't let the user close the dialog by clicking outside of it, but that's a small price to pay for a working date picker. Users can still close the dialog by selecting a date or pressing the "Cancel" button. Similarly, overwriting the handleWindowKeyUp function means users can't use their keyboard to select a calendar date, but the dialog can then be opened with a key event (e.g. pressing 'Enter' on a button).

This is a working example of Material-UI's DatePickerDialog opening with a button click – and focusing the button and pressing enter – rather than the text field used by the default DatePicker component.

I've put this working example on GitHub, including instructions for running it.

Want to build Shopify apps for fun, glory and (most importantly) profit? I'm writing an update to The Shopify Development Handbook that will walk you through every step of the Shopify app development process using the new DotNet Core and Asp.Net Core. You can join the mailing list here to get an email as soon as it's launched. You'll also get a free guide which helps you get started building a Shopify application using the full .NET Framework and ASP.NET MVC.

Want to get started right now? The current version of The Shopify Development Handbook is on sale at Gumroad right now! Pick it up now and you'll get the updated version for free!

I'm available for hire. Shoot me an email at joshua@nozzlegear.com and we'll discuss your project.